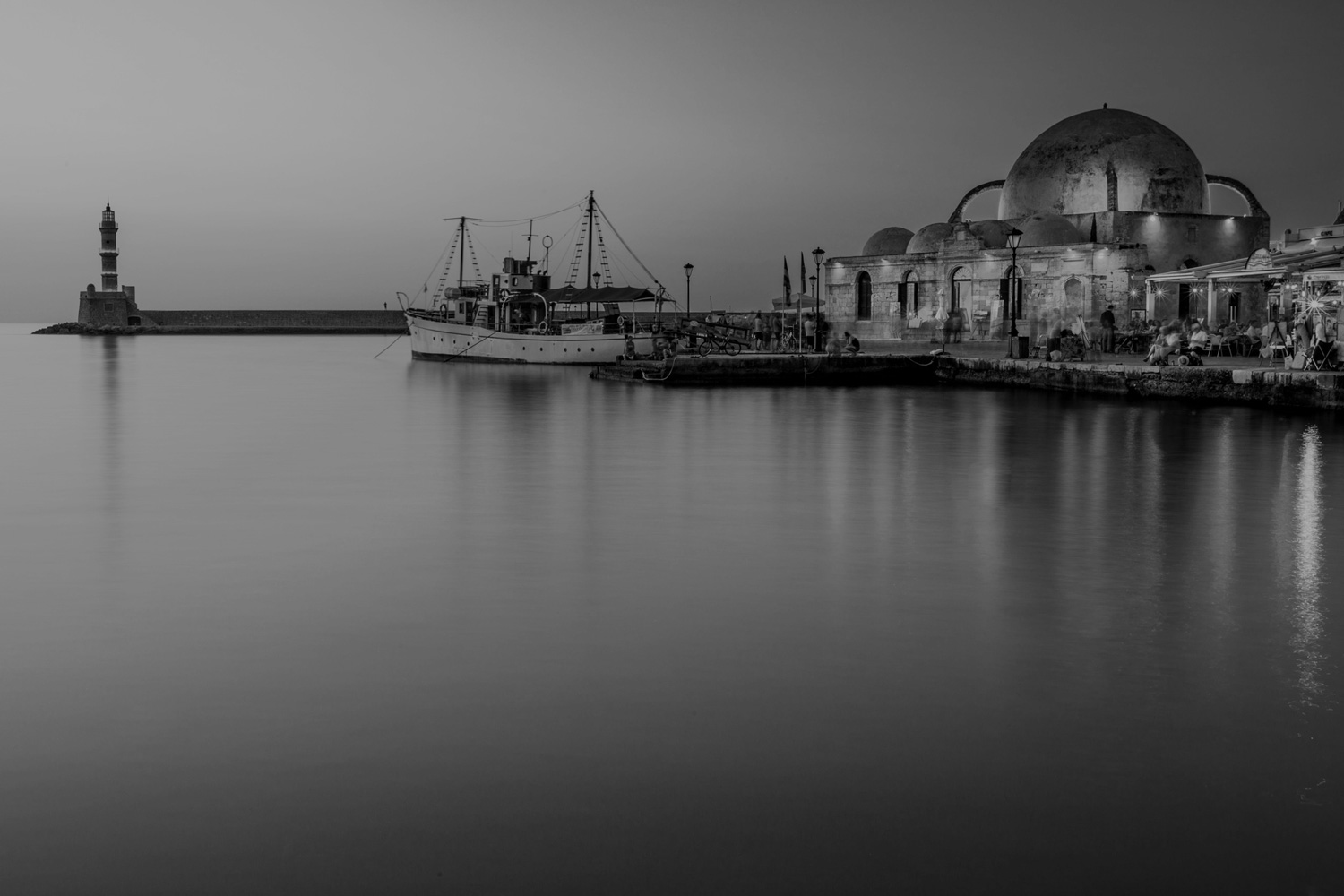 Kucuk Hasan Pasha Mosque, or Yiali Tzamisi, or Mosque of the Janissaries, as it is otherwise called, is built in one of the most advantageous point in the center of the Old Venetian Harbour of Chania city.

Being the prominent building from the Ottoman era in Chania city that has survived until today, Kucuk Hasan Pasha Mosque, or Yiali Tzamisi, is an architectural masterpiece, that will grab your attention when strolling in the Old Venetian Harbour.

Kucuk Hasan Pasha Mosque, or Yiali Tzamisi: A landmark of Chania city, right in the center of the Old Venetian Harbour.

Chances are, when you visit Chania Old Town, you will descend the central Chalidon street to reach the center of the Old Venetian Harbour. If you continue straight towards the eastern part of the harbour, and pass by a couple of cafes and taverns, you will see an impressive domed building with exquisite architecture from the Ottoman era. This is the Kucuk Hasan Pasha Mosque, or Yiali Tzamisi.

In front of the Kucuk Hasan Mosque is the unofficial parking place of the traditional horse carriages, that are used to carry visitors in style up to this day. If you sit or stand on this spot, especially in the summer when there are a lot of visitors and much activity, you cannot fail to see something interesting happening in front of you, that you may want to keep with a photo or video.

The architecture of the mosque, as conceived by its Armenian architect, is striking. On top of its roof, there is a big dome, that is supported by 4 thin stone arches that connect it to the 4 corners of the main building. By its two sides that are facing the sea, there are other 7 small domes on top of the extension of the building in these two sides, the height of its roof being smaller, in order for the smaller domes to reach the height of the walls of the main building.

The name Kucuk Hasan Pasha Mosque comes from the name of the Ottoman “pasha” (ruler) of the era, who was called Kucuk Hasan (or “little Hasan”).

The other name of the mosque, Yiali Tzamisi, derives from its location, and means “mosque by the sea”. Finally, its third name, Mosque of the Janissaries, comes from the janissaries army corps, which consisted of Greeks serving in the Ottoman guard.

The mosque was built in the middle of the 17th century, in the place where a Christian church used to be. After the Ottomans conquered Crete, it was for centuries – and still is – the most impressive Ottoman building among the Venetian buildings with great architecture lining up in the Old Harbour of Chania city.

Today, it is the only mosque in Chania city from the Ottoman era that still stands. Through the centuries, Kucuk Hasan mosque was of great importance for the Muslim population of the island. In its heyday, it used to have a tall minaret, and also a yard, which also served as a cemetery for the Ottoman governors of the era.

Yiali Tzamisi stopped serving as a mosque in 1923, and, since then, it was used for different purposes, according to the needs of Chania city. After being used as a tourist information office, today the building functions as an art exhibition space.

Kucuk Hasan Pasha Mosque, or Yiali Tzamisi, or Mosque of the Janissaries, is one of the most recognizable buildings in the Old Venetian Harbour of Chania city. With its exquisite, unique architecture, and its central location, it simply cannot go unnoticed.

The only representative building of high architecture from the Ottoman era of Chania city, Kucuk Hasan Pasha Mosque, or Yiali Tzamisi, is until today a reminder of the multicultural past of this extraordinary city.